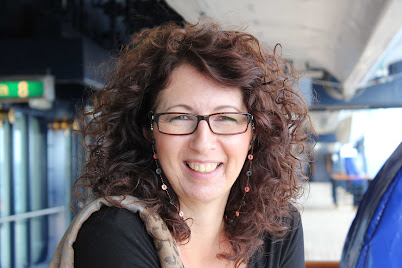 grew up in Germany and Southern France

graduated as translator and interpreter

began research about medieval history in 1995

translated into english, spanish, russian and other languages...

are available on Amazon.com

Three questions I am often asked: why, what and how?

Why did you start writing books?

What did you write about?

How did you begin writing?

When I was a little girl I loved fairy tales and believed that everything was possible. And I still think it is! Although history didn’t interest me that much in school, after I bought my first historical novel (Ken Follett’s Pillars of the Earth of course!), I loved it. I read more books about the Middle Ages and started to dream about becoming a writer myself. I began studying European medieval history, researching for years and developing an intense passion for it.

When I discovered William Marshal, Guillaume le Maréchal as his Norman fellow knights called him, I was fascinated by his personality, his adventurous life and extraordinary career and immediately knew that I wanted to write about him. William Marshal got married only at the age of forty and this made me wonder what his life as a bachelor might have been like. I imagined a secret love, maybe even an illegitimate son no one knew about. That was how Ellenweore (Eleanor, in its Old English version) and Will, the protagonists of the first to books were born.

But who was this woman? She had to be very special; otherwise a man like William Marshal wouldn’t have fallen in love with her. I did more research and found there were lots of stories about all sorts of trades and crafts, but nothing that focused on swordsmithing. Knowing that the sword was the most important weapon of the Middle Ages and an important sign of power and wealth, I held my breath. Why couldn’t the woman William falls in love with be a talented swordsmith? The idea thrilled me, but was it possible that a woman made swords during this time? The answer is yes, it was certainly possible, but only under special circumstances and would have been extremely difficult.

That is why I created Ellenweore to be the daughter of a blacksmith and to be especially talented in her father’s craft. Not being a noble woman herself, she could never have married William but could of course have fallen in love with him! Ellenweore, the young woman dreaming of becoming England’s most brilliant swordsmith is the protagonist of the first book of the trilogy about William Marshal.

During the writing of the book, I had to become an expert in smithing (at least in the theory of sword-making) and consulted a swordsmith in order to convey the details of the amazing process in scenes that are both exciting and technically accurate at the same time.

The second book is about the adventures of young Will, Ellenweore’s son. The boy knows that his father is a nobleman but not that it is the Marshal, the famous knight he admires so much. Young Will dreams about becoming a falconer and leaves home to avoid a future in his mother’s forge. His gift for raising and training birds of prey gives him great opportunities and leads right to the graces of the King. Young Will is as stubborn as his mother and resents her for not telling him who his father is. When he finally gets to know, it seems too late for him to accept. He has built his life against powerful enemies and without his father’s help; at least this is what he believes...

Whilst the first part of the trilogy is about a craftswoman and her understanding of the world, the second part is settled in the lower nobility. These noblemen and women are quite well informed and more involved in politics than craftsmen and women but they do not understand all the reasons the King might have to wage a war. They have to execute his majesty’s orders without having a lot of influence on the King. But the second book is also about the art of hunting with birds of prey, falcons and hawks. Frederic II, emperor of the Holy Roman Empire wrote about falconry in the Middle Ages around 1215, describing the training methods of that time in detail. I used his books together with old hunting stories and experiences of falconers that I personally interviewed to depict most of the breathtaking falconry scenes.

The third part of the trilogy is based on a literary work, written after William Marshal’s death on behalf of his legitimate son and heir and tells the story of the Marshal himself, his life, his dreams, his love and his friends. Most of it is true, some is fiction, but all of it could have happened exactly the way it is described in the novel. His dispute with the King and other interesting stories are historically transmitted. William Marshal is known as the greatest knight of all, because he was the most faithful and glorious man at the sides of the Kings he had been serving for so long. The third part is about what happened behind the scenes at court, about the Kings and their characters and about the politics and constraints that may have led to unpopular decisions. It shows the Marshal’s perspective of Ellenweore and their son but also of the Kings and the men of power he had to face with dignity and patience even under difficult circumstances. Marshal had known power, fortune, loyalty and love but also treason, faithlessness, distress and fear. To be the right hand of the King meant great possibilities but also formidable enemies and great danger…